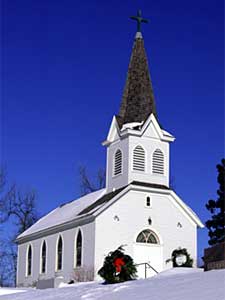 Settling onto my usual spot on the floor of this small nursing facility room, I notice that my patient’s attention is focused inward, as it so often is these days.  Her small body has been washed, her hair combed, and she has been propped up with pillows inside the chair that is much too large for her.  Although she faces the stunning mountains outside her window, filled with Colorado summer wildflowers and radiating sunshine, she is not here.  She is not, however, “nowhere”, as it may appear to some.   Her focus is intent; she sees something I cannot see, experiences a place that is not this one.

“Where are you, Sweetie?” I asked her.  A small gasp escapes her throat, and she says, “In the church”.  She continues to narrate the experience as she is relives it in her mind:

Her family of 11 lived next door to the beautiful Catholic Church in their rural Minnesota town.  Caring for the building and grounds became the responsibility and service of many members of her family, so she spent a great deal of time there throughout her childhood.  Indeed, this charitable act became so interwoven with her sense of self that she continued it throughout the rest of her decades.  Wherever she lived, she helped maintain her church building.  In the army driving a tank, raising her two daughters, later in life as her fingers became too stiff and her muscles too weak to perform most tasks related to building care, she still felt responsible for these duties.

Now, though, she is 98 years old and living in a nursing home on the grounds of a monastery, still surrounded by objects of Catholic ritual and only occasionally able to attend mass in the tiny chapel around the corner from her room.

But today she is in a different religious structure:  that of her youth.

She and her brother went into the church to perform their chores and then began to play.  They skipped up and down the aisle, slid down pews, and eventually ran up to the upper level of the church.  She became engrossed in her own play, only looking up when the sound of the heavy wooden doors closing could be heard beneath her.  Realizing that her brother must have left, she made her way downstairs to follow him home.  But the door would not open to allow her to exit.  She tried pulling and pushing on it with all her strength, but the same result happened each time — it would not budge.

She began to panic as she realized that her brother had locked her into the building.

“I can’t get out,” she continually repeats to me.  “I don’t know why he would do this to me.”  I assure her, “Sweetheart, this is just a memory.  You are not locked in the church anymore.  You are right her with me in your room.”

It is a phrase I hear from her often.  This is the first time she is using it in reference to her brother — or any other human, for that matter.  Every other instance of its use has been in relationship to God.

“I have been good to God my whole life.  Why would he make me suffer?” she asks me throughout each of my weekly visits to her.  Or “See what I have to go through?  And I always worked for the church.  I always cleaned and took care of things.  Why do I have to go through this?”

Her body, beautiful like a cathedral, is becoming her prison as she ages and endures chronic illnesses.

A brother playing tricks, a God who toys with our lives — they do not feel so different from one another, really.

She never does complete the story, so I do not know how she eventually was released from the church that day long ago in her childhood.  I do know that she will  be ultimately released from the body she experiences as a prison, hopefully free to play wherever she wants without fear of being locked inside ever again.